On Twitter I dubbed it “The New Walk of Shame for The Single Woman — Going Out Alone,”   though  there’s nothing really shameful about it.  It’s just not something that I want to be so  . . . obvious, or frequent for that matter.  But of course it is what it is.

Still,  as I walked out of my house in the ‘burbs, wearing  a little black top,  jeans and heels on a Saturday evening right before nightfall, I felt the little ick.  Perhaps under cover of darkness I would have felt differently.   After all, I was just going out.  I wasn’t turning tricks or anything.  (Ironically, even prostitutes are usually getting into a car with someone.  Not me.  Solo all the way.)  Still, I felt weird, exposed.

In the first place, I hadn’t felt like going out at all.   I was exhausted and frankly, tired of going places alone, tired of driving.   I  also hadn’t been sleeping well and had forgotten to eat — again.  See, Confessions of a Skinny Mom.  Additionally, I tend to be “melancholy”  (sounds so much better than clinically depressed) and it’s hard for me  to get out —  yet that is exactly  what I must do, or so I’m told. Plus, I really hate driving  and this was going to be about a thirty minute ride. On the other hand, had I stayed home, well, there may have been tears or  chores or nothing special, followed by  guilt and anger for the tears, chores or nothing special.  See Weekends Off.  I would have beaten myself up  for not going out on the one of two nights a month when the kids are gone and when this time,  coincidentally– luckily,  there was actually someplace where I could go — alone.  Oh yeah,  there was a whole carnival fun house of competing emotions going on my head.  So I forced myself to go out.  This again is where it is helpful to have people with you. When required to meet someone or when a friend is picking you up, you can’t bail.   That little voice that says “just stay home”  is naturally squelched.   But when going out alone, well, a woman can change her mind at the last minute.  A woman’s prerogative.  No one would be disappointed, no one would be left waiting, no one would be the wiser.  I confess that I have driven myself places, or attempted to drive myself places and gotten lost, not found parking, etc. and ended up turning around and going home without ever having left  the car.  This has happened, more than once.

Carrie, minus a “Plus One”

On this particular night I got the ick walking to my car.  It probably hadn’t helped that I’d just watched the Season Five Sex And The City Episode where Carrie does not have a “Plus One” for her big book release party and admits to loneliness,  Charlotte admits to not liking the sound of  talking about her divorce and Miranda avoids telling a man she’s become a mother.  All three of those hit home for me.

So as I walked to my car to go out, my feeling was somewhat reminiscent of the traditional  “Walk of Shame” home that a woman makes  in broad daylight, wearing the same clothes from the night before.  That look screams: “You had somebody last night, you were doing something all night, but  now you’re on your own, and everybody knows it.”

Marshall, Ted, and Barney enjoying the day of Halloween traditional “Walk of Shame” in How I Met Your Mother

I felt  like the walk to my car in daylight and heels  screamed:  “Single woman,  all alone and trying to get some action.”   It’s my own paranoia, fueled by the fact that I’ve been known to “people watch,”  and I know that if I saw myself going out like that in daylight —  alone on a Saturday evening— I’d say,

“I wonder where she’s going?“

I just wanted to get in my car as quickly as possible.

I realize that the fact that I play music gives me a huge advantage for going out alone.  Music provides me with  night-time activities,  like jam sessions, or going out to listen to  other musicians I know play, where I can have a really good excuse for being alone, even in bars. This particular event was a jam session/fundraiser for a music studio run by a guy I’d gone to school with many years ago.   I’m on his mailing list and get impersonal invitations all the time.  I’d never gone before.  I’d never really seriously considered going.   But this was going to be the night that I would actually go, damn it.  I felt obligated —  not to him — but to me.  It was a timing thing.   It was a night I could go, and a place to go.

The studio was at a  location I’d never been to, in the part of the city where I’ve gotten lost more than once.  But it is a new world now.  I wasn’t really traveling alone, not anymore — now I had my new best friend Miss GPS, who right now is a  very polite British woman.  Let’s call her Emma.  Emma  tells me when to turn and when to “take the Motorway.”  I programmed Emma and she guided my journey.  Once I “reached my destination” and parked, I checked in with my Twitter friends, who were giving me the thumbs up for going out alone.

Okay.  Lipstick on, glasses off.   Valuables (meaning Emma) hidden, car locked.  I retrieved the entry code for the security door from my email invitation and was ready to go.  Following the prompts, I entered the code on the door.

Unfortunately,  the call went directly  to voicemail, which was full!  Crap.  No one was answering to buzz me in.

I tried again, repeatedly.  This is when having someone with me might have been  helpful.  You know, someone to complain to, bounce ideas off of . . .  someone to make me not look so stupid.  I mean, picture it, a woman alone, dressed for  going out,  in an iffy neighborhood, standing in front of  a building and —–  no one is buzzing her in!

Tragic, I tell you. Tragic.

I went back to the safety of my car.  Safe, that is, from the public humiliation of being  rejected by a security entry door.  I was about to tweet about my epic  failure of the night and go home, when, out of the corner of my eye I saw that someone had opened the door.  It was my Knight in Shining Armor (or, more accurately, some guy in a Lucky Brand Jeans Tee-Shirt)!   Yay!  Someone had been sent  down to let me in!  My calls were not unanswered!  I was not going to be left alone in my car to do the drive of shame back home.  I was going in! 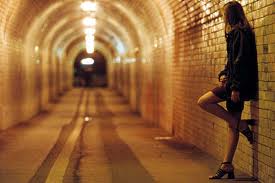 The Lucky Brand guy whom I’d never met showed me upstairs in the not completely renovated warehouse type building, walking me down  long narrow hallways of exposed brick.  We took the freight elevator up.  I wondered for a moment whether I should have told someone where I was going so that if I were to say — go missing —   my loved ones  would have a general location  to give to the police for questioning.

But no worries, I safely entered the studio, full of people who were not scary.   I panicked for a split second when I didn’t see the only guy I  expected to know.   But he was there, and when he saw me, he gave me a hug and said,

“What a nice surprise.”

First part of  my mission had been accomplished.   I had arrived, alone,  albeit slightly overdressed.   But I was there.  Doing the visual room check it appeared that most people came with someone, of course.   Some were couples, some were related, some were friends.  While the people were open with introductions,  they mostly  talked to each other. I immediately joined the jam, avoiding the standing alone awkwardness.   When I wasn’t playing I parked myself in an area to watch and listen (and where, by design, I didn’t have to talk).  One other good (or bad) thing about music events is that a person can be there  and never really have a conversation at all and, more importantly,  the lack of  conversation is not so obvious.    This makes my attendance “minus a Plus One”  a little less alone, and it  comes as quite a relief to my road dog, Ms.  Social Anxiety, who is often with me, even if no one else can see her . . . bwa ha ha ha.

In the end, though, I  got out of the house, out of my neighborhood, and stepped out of the box (a different type of music, even played a different instrument for a little while). Plus, I do love music.  And it is absolutely true that music brings people together without any talking at all —  it breaks down both language and more importantly for me,  social barriers,  and really,  how cool is that?

My English Electronic Friend Emma and I returned home safely —  under cover of darkness.