The Perfect Man — or so I thought. 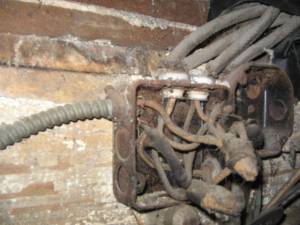 My Electrical Challenges — or My Heart

Sometimes I bought what I needed.

Sometimes I’d just stare at items and plan my next project.

I had decided I would learn about electrical work (dangerous, I know). My thinking was that carpentry is all good but it requires a fair amount of strength – man strength that I just don’t have, and I’d often need help for those projects anyway, same with plumbing. I was looking to learn how to do things I can do my own damn self. So electrical work– nothing big– more like just being able to trouble shoot and maybe one day being able to replace a receptacle or put in a light fixture — could be a skill I could use by myself. It doesn’t take a whole lot of strength, and it seemed like something about which I could at least try to develop a working knowledge. So I bought a book and was standing in the electrical aisle — you know, just looking.

(As an aside, if you like the work boots kinda guy, it’s fun to look at the home improvement store customers early in the morning during the week if you can get there. Weekends, not so much, unless you want to ogle married guys with their wives and kids in tow.)

Anyway, a nice gentleman working there asked if he could help me. He was okay cute, well-spoken, friendly — impressed when I told him about my projects but not condescending. The conversation turned personal and I found out he was divorced with grown kids (he must have married young), and he owned his home. I told him I was getting divorced too, hence my move to the fixer home (my Hoarders dump). 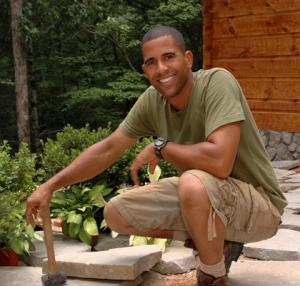 Ahmed Hassan, Former Host of DIY and HGTV’s “Yard Crashers” I miss him, what were they thinking in replacing him?

I started to think: Well, this is The Perfect Man. Based on his store discount alone I could justify falling for him. Plus — bonus, he actually had skills, electrical skills, construction skills — and a nice smile. This man could teach me things. (I was still mid-divorce nastiness, not dating but trying to be open to it.) I started to fantasize about power tools and having someone to hold the other end of the tape measure. Ahhh “Maybe I should go out with this guy,” I thought. “What can it hurt?” So when he finally got around to asking if he could give me his number (very gentlemanly I thought), I just said, “Sure.” At the time, this was a huge step for me. Though my husband and I had been separated for a while, I did not feel very single yet and was not ready to be “out there.” (Sadly, some of that has not changed.) Anyway, he got some paper, scribbled his name and number and handed it to me.

His name? —- SAME FREAKIN’ NAME AS MY ESTRANGED HUSBAND!!!!

I kept his number for a while, but I couldn’t bring myself to call. I knew I’d never be able to say his name. Never. Ever.

My Home Improvement Store Guy Fantasy was over.

Just Me With . . . the digits of a guy with the same name as my husband.

The Snowman — another chance meeting 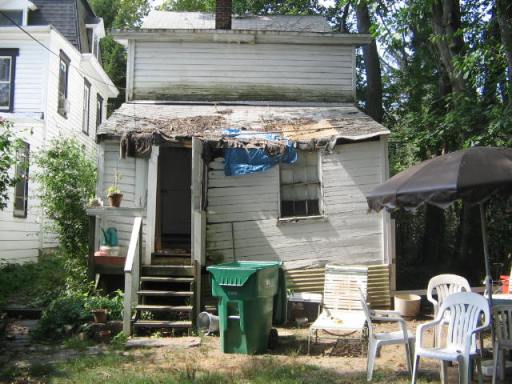 I saw this home and had to have it. I’m crazy that way.

When it got closer to move-in time I did do some work/planning inside the house. 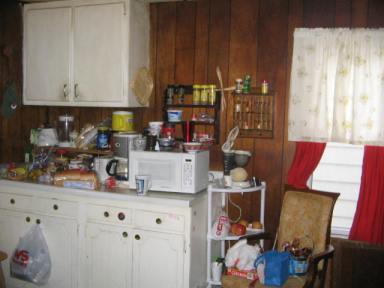 One fine day I was in the kitchen measuring, trying to come up with a plan to remodel the kitchen which, again, was nasty –I mean  it had stained, smelly carpet —  IN THE KITCHEN!   Once white ceiling tiles which were  brown from cigarette smoke and water damage,  and the kitchen boasted a lovely exposed toilet pipe,  etc.  But I was financially challenged and wasn’t sure how I was going to be able to afford all the home renovations needed at one time.   I briefly considered trying to live with the kitchen “as is’ for a while.   (Of course, after removing the carpet and massive cleaning and disinfecting.)

Makes you want to cook, right?

During the rental period, the matriarch of the family, bless her heart, had become ill.  She was staying in a hospital bed in the front room (the hallway was too small to get a bed upstairs).  Her common law daughter-in-law (the one living upstairs with Piss Man) was her primary caretaker. See  What Happened In My House?  Murder?   The daughter-in-law seemed to want to befriend me. I can talk to anybody, really, so we were chatting it up.  Mind you, this was before the discovery of The Piss Collection.

But then something happened.

She did this right in front of me!!!

My hopes of my family using the existing kitchen for a while and thus staggering the home renovations were dashed, or should I say splashed down the kitchen sink.  A kitchen sink currently being used and surrounded by dishes and food.

When the family  moved out  of my new old house, the entire kitchen — including the kitchen sink — was demolished by a friend and I — within days.  We lived for four months with no kitchen at all.  But I’d rather have no kitchen at all than —-

Just Me With . . . The Ever Popular “Toilet — Kitchen Sink Combination.”

Related:   What Happened in My House, Murder?

and  That Hoarders Smell

and Exhumation by Accident — Be Careful What You Dig For