I Went To A Dinner Party Alone 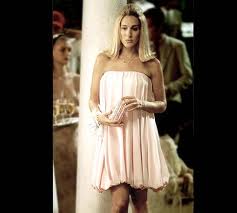 Carrie, without a date at a wedding in Sex and The City

If you’ve read my previous post, “You Don’t Have To Bring a Date, Come Alone. Come Alone. COME ALONE!” you know that I was alternatively stressed, concerned, pissed and kinda bummed by the repeated suggestion that I come alone to a dinner party. Here is the update.

Yes, I went alone. Yes, and as I predicted, it was fine.

Let me set the scene. It was at a private home, more like an estate. The night was beautiful so everything was set outside –cocktails and hors d’oeuvres for an hour, then a buffet dinner at tables around the pool. It was a catered affair with gorgeous centerpieces and decorations all in pink and white, to celebrate Cheryl’s being cancer free. Guests were also encouraged to wear pink, and on behalf of those who did, Cheryl would donate money to Cancer research. Everyone had on some sort of pink. It was a really classy affair, with around fifty guests.

Okay enough with the back drop, this is how it played out.

Of course I took that opening to add, “Well, the night’s young.” Ha ha ha, the Tears of a Clown.

I swear, that has never happened to me before. We laughed it off. She said she’d picked hers up in the islands, Martinique, I think, while on vacation.

“Where did you get yours?” she asked.

And me, being painfully truthful, admitted, “At a consignment shop.”

At a consignment shop.

Let’s review, shall we? She got hers while on an exotic island vacation. I got mine at a thrift store.

There are two things wrong with this:

One: I admitted I was wearing a used shirt. No shame in wearing second hand clothes, but sharing that information isn’t necessary. It’s not like telling folks you have a rescue dog — one of the few situations where the wealthy applaud acquiring someone else’s cast offs. I should have said my blouse was a rescue. My snappy comebacks come years late … but I digress.

Wait, there’s a third thing wrong with this — WE WERE WEARING THE SAME SHIRT!

Eventually I made my way away from my shirt twin to some familiar faces. As Cheryl promised there were a couple of couples I knew because they had kids the same age of mine and who are in the same activities. One was the same couple who, at the graduation party, had walked away from me. But this time they were very talkative and friendly. The husband reminds me (and my kids) of McDreamy on Grey’s Anatomy.

And we did the suburban parent thing and talked about our kids, college applications, etc. The other couple introduced themselves to me as if we’d just met, which was weird, since I’ve been running into and exchanging pleasantries with this couple since our high school senior kids were in the fourth grade.

Carrie, being photographed without a “Plus One” in Sex In The City

When the party moved to the assigned poolside tables, I sat between the McDreamys and the only other single person at the event, Regina. I discovered that Regina was divorced with children and in the midst of downsizing so we talked about the whole downsizing, moving, process, etc. and I chatted with her and the other couples about our kids, etc. I think the people (and by people, I mean couples) on the other side of the table may have been interesting, but the centerpiece was too big to talk over. They must have been listening to our conversation, however, because in the buffet line a woman asked if I was a professional organizer because I seem to know so much about it. Ha!

My hero, Matt Paxton from Hoarders

And that was that, except that at some point someone said, I think it was Regina, “I heard someone else here has on the same top, is that true?” And I, of course, helpfully, pointed her out. My shirt twin was at the next table, as it turns out. I added that, “Well, I had wondered if I’d be dressed appropriately. Clearly,” gesturing to my shirt twin, “I am.” Ha ha ha, Tears of a Clown.

The party wound down, I left when everyone else did. It was nice, fine, a lovely affair. It was the kind of party I used to like to look at from a distance, “Oh look, rich people are having a party!” And then I’d drive or walk by to try to catch a glimpse. It was good to be more than a fly on the wall, or a nosy neighbor, or a creepy stalker.

But, as to the whole “Come Alone!” thing — no, Cheryl did not have an ulterior motive and play matchmaker for me, unless, of course, you count Regina.

And yes, I was fine without a date. As far as I could tell, and based on Cheryl’s comments, all the other couples were married. It was not a casual date kind of party. It still would have been okay to have brought a date, but it was okay without.

This does not mean, however, that I will forever go to these things alone. Nope.

Just Me With . . . a shirt twin, a lady dinner date, and a new career as a professional organizer.

P.S. Cheryl actually did a great thing by having assigned tables, especially when there are only a couple of singles and some guests who don’t know many other people. I didn’t have to walk up to a table of couples and ask if I could join them or wait by myself for coupled up strangers to sit with me. And at least I wasn’t seated with my shirt twin. 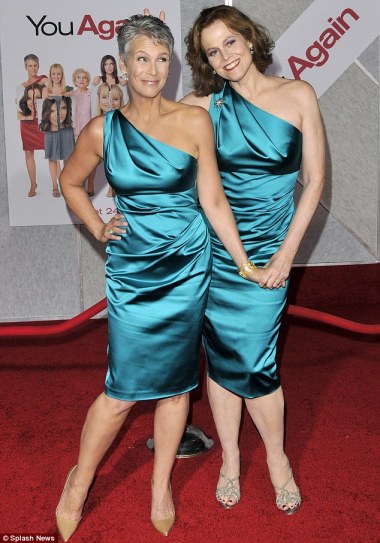 Sigourney Weaver and Jamie Lee Curtis from “You Again”