Another Encounter with The Ex-Con 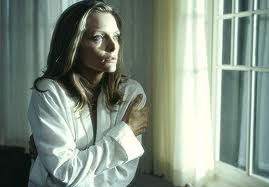 Michelle Pfeiffer, the nosy neighbor in “What Lies Beneath”

I’ve written before about being a nosy neighbor, being hit on by Brian, the strange man who lives around the corner, and feeling uncomfortable (at first) about saying no.  See, I Turned Down a Dinner Date With An Ex-Con.

Chandler on Friends, after he kicked his drug problem.

Recently, I saw Brian again.  I’ve seen him, on and off,  of course, from time to time, but since I’d turned him down he hadn’t stopped to talk or come by to borrow things.

I have creepy neighbors, but I also have “normal neighbors.”   The kids and I help normal neighbors with their new puppy, Bailey.  And by “the kids and I” — I mean, usually, me.  When I was walking  Bailey the other day,  I found myself walking in Brian’s direction.

Brian’s appearance has changed — again.  It’s Winter now so he doesn’t go shirtless anymore.  He’s cut his hair, which is a good thing, because he seemed disheveled before.  I’d seen him on crutches a couple of weeks ago, but now the crutches are gone — as are his glasses.  He looks different without his glasses.  I wonder what happened to his glasses?  But I digress . . .

Chance meeting with a strange man in Psycho

Bailey the puppy is a bit timid, but once a stranger speaks nicely to her, she gets very excited and friendly.

She was terrified of Brian.

He tried to be nice to her.  He did what you’re supposed to do — offered his closed fist, fingers down, for the pup to sniff, but Bailey was still afraid.   She started to run (on the extendable leash) and when I pulled her back she was visibly shaking.

It begs the question: What does this dog sense about this man?

“Hello, Roxanne,  I got your name right this time!”

Brian has found at least two other names that sort of rhyme with Roxanne that he’s used.  But on this particular day he got it right.

We exchanged the “How are you, blah blah blahs.”

“I saw your daughter the other day,” Brian added, “and I thought she was you.  That just tells me how young you look.  But you won’t tell me how old you are.”

A dog can be a nice distraction, and as I turned to calm the puppy and explained she wasn’t mine, Brian placed his hand on my back and slowly and deliberately caressed me with his thumb.

A man’s hand on a woman’s back can be oh so right, or oh so wrong.

It was a move too “familiar” to be casual.

Why is he touching me?

I backed away, continuing the small talk, and making my excuses to leave.   But then he put his arms out to hug me.

I immediately felt the “ick”  and could smell the cigarettes.

Ah, maybe that’s why Bailey the puppy was so upset.  Different smells bother dogs, and Bailey’s owners (normal neighbors) don’t smoke. Maybe that’s all it was.  I hoped.

I was seconds  from a (not completely) clean get-away when Brian asked,

“So when are we gonna get together?”

“Uh, I don’t know,” I said, while shaking my head no, and looking at the ground. I thought I was being  dismissive.

“Still thinking about it, huh?”  This was Brian’s response to my non-answer.

And in typical Roxanne fashion, I replied,  “Yeah, I guess so.”

The voices in my head screamed, What are you saying?  Shut up!

What Brian said next gave me the “ick” — again:

“Well, we live close to each other at least, so it would make it easy.”

It would make WHAT easy?  The voices in my head screamed.

“Yeah, I guess.” I mumbled, this time, with an accompanying awkward laugh.  “Okay, bye.”

Brian walked toward his house.  I continued in the opposite direction until it was safe, then doubled back and went home.

What is wrong with me?   Why can’t I just say, “Sorry not interested” when I need to?  It’s a problem.   There’s a pattern.   And why did Brian touch me, why did he touch me like he was my boyfriend?   Why did he  hug me and why did I allow it?  And most importantly, What does the dog instinctively know? 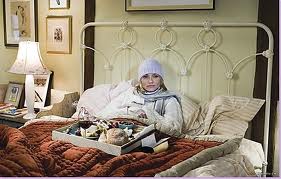 Cameron Diaz, home for the night in “The Holiday”

Other posts when I couldn’t just say “NO!”:

Landscaper Guy — Not Digging Him, and

Landscaper Guy and The Female Chandler Bing, and

Landscaper Guy and a Phone Smarter Than Me, and

Where Did I Put My Fake Boyfriend?