I’m getting my house painted this week. I know I’ve written about painting it myself, describing how That Hoarders Smell  inside the house was so bad that it engulfed me even while I was painting outside.  So yeah, I painted the house already.

But I never finished.

I painted the front under the porch.  Then I stood on the porch roof to paint the second floor.  And, along with my nephew, I perched on scaffolding temporarily left by another contractor as I prepped, primed and painted the back of the house.

That left the sides, where the paint was peeling so badly  that barely brushing by it caused a snow flurry of dirty paint flakes, some big, some small, some lead-based, some not. 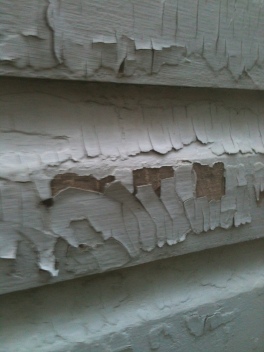 This is actually how Creepy Neighbor No.1’s House looks now. Mine was similar, worse.

So although usually one preps, primes and paints from the top down, I started from the bottom up, reasoning that since we were about to move into this house I didn’t want the children to be exposed to this peeling paint at eye level. The upper floors weren’t peeling or flaking as badly as the lower level and at least no one would be touching it.  So, for safety’s sake I tackled the first floor.   Well, safety and the fact that I could reach the lower level and paint it myself without scaffolding or big ladders that I didn’t own.

The top side sections, however,  have not been prepped, primed, or painted.

It’s tacky.  It’s been this way for over two years.

I had every intention of painting the rest of the house myself. A contractor friend even lent me some scaffolding and we put it up on one side of the house.  Then, well, stuff happened, and  I  changed and  eventually went off my meds, which gave me vertigo, poor equilibrium, extreme dizziness, and severe sensitivity to light.  I couldn’t even think about doing  it then.   My friend eventually took his scaffolding back, unused.

And, I lost my Mojo.  I’d done so much work on this little Hoarders house. I’d tried to make it nice.  I did make it nice. But recently I’ve been feeling that no matter what I do to this house, which sits on a busy street and backs up onto the perimeter of an poor neighborhood, it will always be compared to the much larger marital home situated in a park-like setting. I don’t miss that home at all,  and selling that home was one of the best decisions I’ve ever made — that decision may be a subject of another post — but I don’t love where we are now, I tried . . .

But. . .  I never finished painting the house.  Perhaps part of me became comfortable with my half painted house. Maybe it was some sort of  admission of defeat.   The move been an adjustment, a difficult adjustment.  I’m not going pretend otherwise —  anymore.

Don’t get me wrong. I’m proud of my accomplishments with respect to this home and my family. I’m happy that we have a roof over our heads and that the kids didn’t have to change schools — which was the reason why I bought the little hoarders home in the first place.   And I know things could be a lot worse, and that things aren’t really that bad, or really bad at all.

Still, the unfinished paint job screams that there are still struggles in this home.

Anyone looking at it would  ask,

“Cute house.  But when is she going to finish painting it?”

Well, the answer is “Now.”  I’m borrowing from Peter to pay Paul to pay some Painters that gave me a good deal because one of my “Friends Without Benefits” told them to.

I’m waving the white flag in surrender.  I  will not finish painting the house myself.  But I will not  leave it partially  unpainted for another year as a shrine to my  failure to renovate our way into happiness —  or the land of denial.  I’ve got to think of resale value and protect my investment.  So, I’ve called in the professionals.

It is what it is.  And it has to get done.   At least it won’t look tacky anymore.

“Maybe it will lift my spirits,” I thought, as I’ve been feeling a bit blue lately.

And then, the universe threw me a bone.

The painters here are very nice guys.  Just now one of them stopped me and said,

“I don’t want you to get a big head or anything, but I gotta tell you . . .   you look just like Halle Berry.  Hasn’t anyone ever told you that?  Mike (the other painter) said it yesterday, too.  I’m a movie buff, so I would know.”

I have to say, I’m starting to feel a lot better about hiring these guys to paint my house.  A lot better.

Just Me With . . . a paint job in progress, in butter cream with hunter green trim, done expertly  by — my new best friends.

Postscript:   The painting is finished.  The house looks great, it really does, and just in time for Winter.

Sadly, one of my kids informed me that her friends told her that they aren’t allowed to come to our neighborhood, for fear they might get mugged.