Narrator:   There is a fifth dimension beyond that which is known to man. It is a dimension as vast as space and as timeless as infinity. It is the middle ground between light and shadow, between science and superstition, and it lies between the pit of man’s fears and the summit of his knowledge. This is the dimension of imagination. It is an area which we call the Twilight Zone.

My narrator:  Meet Roxanne, a divorced mother of five who sometimes forgets to eat,  or chooses to save  a simple breakfast bar for her children rather than “waste” it on herself.   It’s an ordinary day for  Roxanne, who had left home for her only true indulgence —  getting her morning coffee.  She didn’t know that when she returned into her neighborhood, she would cross into . . .    The Twilight Zone. 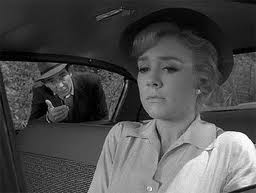 Over the weekend we had some icy snow in my part of the world.   I was out running errands (in other words:  getting coffee).   On the way home I was wondering whether I could get my children to shovel  the sidewalks for me, doubted that they would before going to visit their father and  worried about whether doing it myself would throw my back out again.   My Aching Back    A neighbor offered to pay my daughter to do hers.   I wished that daughter or any of the children would do ours also, without back talk, threats or rewards  — and before they had to go.   It probably wouldn’t happen.   I got my coffee, and while there I  picked up my daughter’s  favorite breakfast sandwich as a treat,  plus I wanted her to get something warm in her belly before going out  to shovel the neighbor’s walkway.    As is often the case, I didn’t get a sandwich for myself,  saving a couple of bucks, not wanting to spend the money on — me.  As I turned  into my neighborhood, I had my daily thoughts of  “I really hate this neighborhood, I don’t like  living here.”   Followed by, “I wonder if I can figure out a way to move again but keep the kids in the same schools.”  And rounding out the trilogy, “Don’t be ridiculous, there’s no reason to move except that you don’t like it here and that’s just not a good enough reason.”

Given all these thoughts rushing through my head it was rather amazing that I happened to spot a woman on the side of the road.    She had plastic grocery store bags spread in front of her in the snow, was shaking and clenching her hands and seemed to be trying to figure out a way to  pick them up again.   Clearly she was struggling to carry her groceries home in the snow.

I stopped, backed up, asked if she wanted a ride.   She only gave pause for a moment and eyed me to make sure I didn’t look like a crazy.  (Sometimes I can appear quite normal . . . but I digress).  It was bitter cold outside.   She accepted the ride, put her bags in the back seat and sat up front next to me, thanking me.   She explained that she rushed out so quickly to get some things from the store that she had forgotten her gloves.   It wasn’t that the bags were heavy, she said, it was that her hands were frozen and she couldn’t hold them anymore.  “My hands hurt so bad,” she said.

It  didn’t really matter to me why she was in her predicament, I just wanted to get her home.  It was too damn cold and icy to walk, especially with groceries, no cart and no gloves.  She went on to  explain that her brother couldn’t shovel the car out because of his eye.   His eye.  Huh.  I pondered this.  Why would  his eye keep him from shoveling . . .   maybe he’d had surgery?  I drifted off  to  my own little world, thoughts racing for first place in my head.

Then my passenger said,  “I’m Roxanne.”

Skid marks on the brain.  Thoughts stopped on a dime.

“Get OUT!!!”   I responded, perhaps a little too energetically, reminiscent of  Elaine from Seinfeld.

“What?” she responded, looking concerned.  It was an unfortunate choice of words for my exclamation —  I mean, saying “Get Out!” to a passenger in my car!  Smooth, Roxanne.

“MY name is Roxanne,” I quickly explained.

Roxanne said that I could drop her at a nearby intersection but I told her, no, I would take her all the way home. During the ride  I  discovered that  we had gone to the same high school, and though I had assumed she was older than me, it turned out but she was too young for me even to have known her from school.  She appeared worn beyond her years. I didn’t recall ever having seen her in the neighborhood or around town.  It was odd.

So what of my surprise passenger, Roxanne?    A woman who shared my name, who was walking alone in the snow-covered street,  who failed to  think of her own needs while rushing to meet the needs of others.   The consequences of her neglect of self was  finding herself standing  in the snow with frozen fingers, groceries at her feet  and  blocks from home.  For whatever reason– her family was not there to help her  and she had to accept a ride from a stranger.

It gave me pause.

I’m that Roxanne, too, coming home with a sandwich for a child so that she could shovel  another family’s walk but bringing no food for myself.

I almost said to the other Roxanne, “How could you leave home without gloves?  You’ve got to take care of yourself.  You’re no good to anybody if you get sick or frostbite.”   But what stopped me, other than that being creepy coming from a stranger, is that other people have been saying that to me lately.  My therapeutic goals are largely based upon meeting my basic self-care needs without guilt.

“Roxanne,  have you been eating and sleeping?   You can’t take care of your family if you don’t take care yourself.”  I’ve heard often.  Too often.

Did the universe send me that other Roxanne to  remind me that  I need to help myself?  I mean, I know that when I get sick, the whole system fails.  I know this, yet  I still need reminders that protecting myself from the elements, eating, sleeping and yes even doing something just for my sheer enjoyment of it  is as  important as, well — anything.    Somehow, that reminder got in my car that day, and her name was Roxanne.

My Narrator:   Roxanne, a functioning, yet melancholy divorced mother who often puts her basic needs well behind those in her care, stops in the snow to assist an eerily familiar woman in distress, a woman who perhaps shares more than just her name  in . . . The Twilight Zone.

Just Me With . . .  an over-active imagination?

P.S.   I told my therapist about it.  She queried whether the woman was real.

I’m not even going there.

Join 1,407 other subscribers
Follow Just Me With . . . on WordPress.com