Purging and Cleaning and Finding Stuff 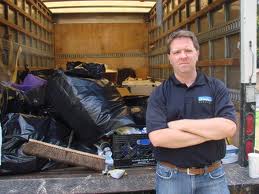 I’ve been at it again. Cleaning out my house. My therapy. And also, kind of a strategic get out of jail plan. In the next year to 18 months I plan to move, and sell or rent out my home — the former hoarder’s house to which I fled upon the demise of my marital bliss — just one half step ahead of the hot flaming lava chasing me from my volcano of debt. Dramatic, I know.

So might as well start the pre-listing clean out now, right? Plus the kids are not here and I need to alter my surroundings. Again. And, it’s freee entertainment, which is a necessity right now, the free part.

I needed to seriously clean. Things are dirty. Even though I always felt like I was cleaning all the time, I wasn’t really cleaning. I was straightening up and clearing and cleaning around things — and those people I made — and dogs — but I never had all the stuff out of the way long enough to get to the really deep cleaning.

We had downsized already when we moved here and got rid of around 2/3 of our possessions. Many other belongings were removed along the way as I realized I still didn’t have room for them. My parents got my formal sofa and chairs (and I got rid of their outdated stuff) some other casual furniture purchased for the house just didn’t fit. I get rid of things all the time. But as the kids grew in our modestly sized home, we have been stepping over each other. Literally. We’re all relatively and objectively tall and have large feet and long legs. We take up a lot of room. And the sprints to be the first one to get the only bathroom in the house were getting serious, and a bit dangerous. But now the kids are gone for a while — a college thing — to be discussed in another post — it’s time for me to, as a good friend I recently reconnected with said, “reset.”

As part of my clean out, clean up, and just clean, I went through an ottoman that doubles for “storage” of our miscellaneous electronics. I’d throw any cord I couldn’t identify, or those I could identify but did not need at that moment, old phones, parts of video games, remote controls, etc. in there. Some of these electronics were even in baggies to keep them from tangling around each other. I was proud of that and that at least most of the stuff in there was part of the same category. But I hadn’t taken out everything in years.

And at the bottom of the cords, games, adapters, phones, remote controls, and extension cords, there was a cassette tape. (For those of you who are not familiar, cassettes were used to store audio information before CDs, and CDS were and are used when music cannot be accessed from phones, or there is an absence of wifi or available data.)

This particular cassette was an audio recording of my wedding.

The church where I married recorded everything that happened there. The good, the bad, and the ugly. I assume this was to preserve sermons and music. In my case it preserved our voices stating our now defunct wedding vows, along with some really good music (I had a brass quartet at my wedding. It was beautiful . . . but I digress) and it recorded the reading of probably the saddest poem ever read at a wedding, “The People Who Never Say Goodbye.” This was a cry for help. As I’ve said before, ladies, your job as bridesmaids is not limited to showers, bachelorette parties, and shopping for dresses. Your job is to read the room, the bride, and call the whole thing off if necessary. Almost a Runaway Bride

My first thought was just to throw the cassette away, like my husband did with our vows. No fuss, no muss, no pomp, no circumstance. A Twitter friend suggested that I burn the tape. I’m no stranger to the burn. This ain’t my first rodeo. My Wedding Album. In response I joked that if I was a guy I’d whip “it” out and pee on it. The same Twitter friend reminded me — “You could squat.” Smiling about that, I put it on the table while I finished going through the electronics. Maybe, I thought, I’ll just listen to the music.

My next find wasn’t really a find. 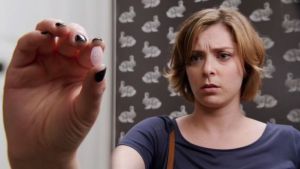 Crazy Ex-Girlfriend finds a pill on the bathroom floor in front of the toilet.

I knew they were there. While cleaning out the medicine cabinet, I saw my old friends Mr. Xanax and Ms. Ambien – relics of my clinical major depression, anxiety, and insomnia following that pesky time when my husband of many years and father of our many children broke up with me. The pills were expired of course, but I’d kept them. Weird, because I never really liked them much and used them very sparingly. If I took a sleeping pill I couldn’t properly wake up in the morning. If I took a Xanax I was just a little bit off, out of it. But I tell ya, this was very helpful in certain situations. Very helpful indeed. It was my pharmaceutical prophylactic in difficult, awkward, or painful situations. Sharing Celebrations .

Having the pills in the house gave me comfort. I think I kept these old meds, you know, just in case . . .

After the scrub down and disinfecting of the cabinet (you’d be amazed at the mess that old razors for four girls leave), I found that the added space in my cabinet was far more calming than presence the old pills.

So — I chucked them. I brought them downstairs, opened the bottles, destroyed the labels and trashed the pills so no one could find them and sell them (it would be wrong for someone else to profit from my misery). And then? I casually dropped the wedding cassette — the audio proof of the “till death do us part” fallacy — in the same trash bin. I don’t want any of those particular reminders of the good, the bad, the ugly or the pharmaceutically numbed in my house.

And that was that.

There has been a slight shift in the universe. Did you feel it?

Oh, and I found the remote control to the actual TV! Now I don’t have to get up to change the input from cable to Netflix. Not too shabby.

Plus, I already own a CD of Vivaldi’s Four Seasons and am blessed to have access to a classical music station, wifi, and a smartphone. There is no reason to listen to a cassette recording of my wedding music. Nope. No reason at all.

Plus, one of the brass players was this asshole, I Don’t Go to Weddings.