I don’t come from a large family, I only had three cousins in the area.   It was my Dad’s sister’s family:  two boys and a girl.  They were Army brats and moved a lot, but eventually settled on our street.  The girl was my age and we were inseparable growing up all the way through high school.  She would escape to my house to get away from her pesky older brothers.  I had my first kiss at the brothers’  party at their house.

Adulthood happens.   Bill, the oldest cousin, was now thirty-two years old.  He was married with three children: a four-year old girl, a three-year old girl and a nine month old baby boy.   His wife was a stay-at-home-mom.  I was also married, but no kids yet.

On October 31st  his wife was home getting the children dressed for Halloween. She was waiting for their Daddy to get home from work  and take the kids Trick Or Treating.

He never got there.

On his way home from work on Halloween night, he was struck head on by a drunk driver  .  .  .  and killed instantly.

His wife, wondering why he was late getting home,  had to receive the news while the kids were in costumes.  It was the most tragic of tragic — a young mother, children too little to understand, a senseless accident occasioned by stupidity.   On Halloween.

Thanksgiving and Christmas were just around the corner –but it would be just the first of many holiday seasons missing a Daddy, a husband, a son, a brother,  and there had been no chance to say goodbye.  It rocked our entire family.  It was devastatingly sad. 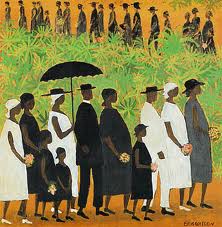 The services were, of course, well attended.  The steering wheel had gone through my cousin’s chest and broken his jaw,  but his face was otherwise intact and they were able to have an open casket. There was a viewing , the funeral itself, the burial and the reception.

It’s difficult to describe how heartbreaking it all was.   There were tears from three generations, a pretty and petite  mother of three– it seemed like a slight breeze could blow her away, bouncing preschool girls, a cutie-pie fat and happy baby boy,  grieving parents, siblings, friends,  aunts and uncles, and yes . . . cousins.  It’s been years and years, but I still think of it, the horror of his senseless death.

When we arrived at the funeral reception, my then husband turned to me and said something I’ve never been able to  forget.

P.S.   This is backstory.   The accident happened years ago, but understandably I think about it every Halloween.   The drunk driver did some time, I don’t recall  how much.  It got him off the road, but it didn’t bring my cousin back.   My cousin’s wife grieved hard but recovered as much as a person can.     She received a settlement from the insurance and never hurt for money.  She eventually remarried a family friend and had one more child.  The children grew up well, the  whole family keeps their father’s memory alive.  That nine month old baby boy grew up to look a lot like the Dad he never knew.   The girls,  young women now, are beautiful, healthy and happy.  His parents  routinely visit the grave and leave fresh flowers on holidays.  I say all this because I don’t want it to appear like I’m using this horrible tragedy just for blog fodder about me.  As I said, it’s that time of year;  it’s on my mind.  And my husband’s statement to me at the funeral reception has haunted me for years . . . and it’s scary.