A Craigslist Fantasy — How I Met the Love of My Life 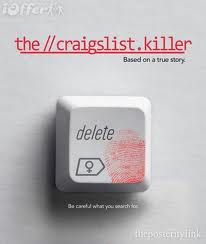 Okay, so I’ve seen The Craigslist Killer movie, based on the true story of a serial killer who picked his victims on Craigslist.  But I’ve allowed myself to indulge in a Craigslist Fantasy while I’m home sick with a cold and a hurt back.

Hell, it could happen, right?

This much is true:  I’m selling a keyboard on Craigslist now.  I got a response from a guy.  Via text we’ve been making plans to meet  so he can check it out.   I had to reschedule once because I was too sick to deal with it,  he responded by text that he hopes I feel better.  Aw, that was nice.

Here’s the fantasy part   (meaning none of this actually happened)  . . .

Chris was scheduled to come on Sunday afternoon at 3:00.  The kids were with my ex-husband.   I started looking for him right before, because I don’t have a doorbell and my dogs were out back.

Chris was medium everything in my fantasy, medium-to-tall height, build, complexion, the kind of guy who could  commit a crime and would not be remembered, except for his smile.  A great smile.  All and all, an impossibly nice mix of nerd and athlete.   After all, this isn’t online dating, I don’t have to check all  the boxes in my harmless fantasy.  He was conveniently without race or ethnicity or age in my fantasy.   He wasn’t  big enough to scare me —  since we are alone in my house,  but he was big enough to be my manly fantasy — since we were alone in my house.

Out of habit I checked his hands.  Clean and no ring.  Good.

He seemed pleased to meet me.   Which means my painstakingly  effortless casual look had succeeded — tight tee-shirt and jeans, sneakers, but earrings,necklace,  lipstick and blush.  However,   in an unconventional  move —  I left my glasses on and hair up in a clip.    Hell, this wasn’t a date.  Plus, if my glasses are on, I can get away with the lack of eye makeup,  which means I don’t have to worry about taking off eye makeup later.   (Always thinking, always planning, often lazy.)  All in all, I presented a  nice mix of nerdy femininity, thank you very much.

I shook his hand, shouldn’t have, since I’ve been blowing my nose all day, but there was a man in my house and I was going to touch him, some way, some how . . .

“Anyway, the keyboard is downstairs.”   Could you wait just a  minute?

I pulled out my cell and called my mom, pretending that she was a boyfriend.

“Hey, sweetie,  just wanted to let you know the man is here to look at the keyboard and I’ll call you  later.  No, take your time — he looks okay.”  I smiled at him.  “But you can come  if you want.”

“Well, you can never be too careful.”  Safety first, safety last, safety always.   (I wonder if he carries condoms?)

The dogs were going crazy outside.  He said, “You can let them in, I love dogs.”  (Ding Ding, we have a winner.)

“No, they’re harmless, but they’ll be all over you.”  (Insert obvious  double entendre)

I showed him to the small door to  my semi-finished basement and motioned him down.

He was lost in the keyboard.  Just like I like them, said the spider to the fly.

I watched him play with it for a bit.    Keyboard technique only  fair, but chording nice.  Knows his way around electronics.   For the first time in a long time I was not in a hurry for a person to leave my house.   I offered him water.  You should always offer a guest in your home something to drink.

My back was aching and I needed to sit, so I sat at my son’s drums (which,by the way, are really mine).   Before I knew it I was playing (at) drums along with him.  Fun.  To quote the great scholar —  The Fresh Prince of Bel Air,

The Fresh Prince of Bel Air

“A girlie who can play the drums can write her own ticket.“

Do ya think I’m sexy now, man in my house?

Chris wanted the keyboard.  Yay!  (I wanted him.  Yes, I like musicians, even part-time basement musicians.)  I explained to him that I threw my back out and couldn’t  help him carry it.  “Oh, I can probably do it.”   He got up to  lift  the keyboard to test the weight.  I watched.

Biceps, good.   Oh my gosh, what is wrong with me?

His pants were too baggy for butt evaluation, which is good, because if he’d had on skinny jeans?   Well, that would have been bad.

All in all.  I like this guy, I thought.

He likes music and the  same music gear I  own.  Good.

He has a job of some sort because we had to schedule around it.  Good.

So far he hasn’t tried to kill me.  Very good.

A fleeting thought —  I keep duct tape in my gig bag in the basement; he’s in my basement.  Hmmm.   I briefly considered getting out the duct tape to ensure a longer visit, but I decided against that.  Sigh.

“Oh, I forgot about the case. It’s upstairs.  I’m sorry I wasn’t able to get everything down because of my back.  Can you help bring it down?”

This meant he had to walk through my house to the upstairs attic storage.

I saw him glance in my bedroom.  My bedroom is nice.  Kind of hotel chic.  Not too feminine.  In other words, man ready.  Yeah, baby.

My kids’ bedrooms?   Not so nice.   Messy.   The kids weren’t home,  and I have been too sick and hurt to clean their rooms.  I apologized for the  messes.  He shrugged and said, “You should have seen my room when I was a kid.” (I’d like to see his room now.)

“My kids are with their dad today.”   Awkward silence.  Why did I say that?   This is horrible, I’m awkward even in my own fantasy.

Why? why? did I say “their dad” ?   Then I remembered my fake boyfriend call I’d made to my mother when he arrived.  Oh no!  So now he thinks I have  multiple kids and at least one  baby daddy plus a boyfriend.  Damn.   Not well-played.  Now the awesome task in front of me was to slip in “Ex-Husband” and “single” in the conversation in the next 45 seconds.

I can be skilled in the art of conversation when I have to be (i.e. when I’ve already messed things up), so when he commented on a painting of me,  I casually mentioned that it was the only  thing my ex-husband gave me that I kept, other than the kids — ha ha — and  that it was painted in Europe and I fantasize about moving to France when my kids get out of school —  and I added, slipped in, really,

Then Chris asked, the dreaded, inevitable question.  He asked me how many kids I have.  I mean, he saw the boy’s drums, now he was walking through my girls’ rooms and there are baby pictures on the walls upstairs.

Well, this is tricky.  I have five children.   Five.   Sometimes I’m afraid to tell guys that.  But I have to say,  they don’t seem to care that much.  Still, it’s a substantial number.

“Wow.”  And he did what many do, glance at my waist.   I pretended to ignore that.

We had the twin conversation and he adds the obligatory,  “You’ve got your hands full,”  thing.   Blah Blah Blah.   My stock may have plummeted.  Damn kids.  Whatever.  There’s a man in my house!!!!    Perhaps I should reconsider the duct tape to keep him here, I thought, now that he knows  I have five kids. Hmmm.

So, long story short, in my fantasy I stood there and watched him load the keyboard and I didn’t drip snot on my chest.   Lots of biceps and sweating were involved, his, which I enjoyed.   He paid what I quoted, didn’t try to talk me down,  and said, in parting, “I hope you feel better.”  Aw, that was nice.   (Which is how this whole thing got started.)

In my fantasy conclusion, my Craigslist guy doesn’t kill me.   He calls me.  And he comes to my next gig.

I don’t allow myself to fantasize any further than that . . .

And they lived happily ever after . . .

Postscript from real life:   Just got a text from him checking in, saying, “Before I made other plans later I wanted to ask how you are doing.”  Aw.  He wanted to know if today was going to work for me.  He ended with, “FYI, I’m in no rush, in any case.   Take care, Chris.”   I replied that I’d reschedule and hold the keyboard for him.

I think I’m in love.

So the fantasy continues . . . for another day.  Because today I feel like crap, look a hot mess,  and walk funny.

Final Postscript from real life:   He came to my house to see the keyboard — with his girlfriend.  Sigh.  At least he bought it.  I used the money to pay off a credit card.   Next fantasy?  Becoming debt-free.