Waiting for Spring, still. It was a rough Winter, as far as precipitation, emotionally, vehicularly (I love making up words sometimes), it was overall kind of blue.

In my part of the world we got a lot of snow this year. Snow means different things to me now that I’m in a much smaller house with no driveway. Not so bad. There’s so much less snow removal, but it is all my responsibility. I can’t always count on my beautiful ( lousy, good-for-nothing children) to help me when it actually needs to be done.

One fine, sunny, cold and clear day after a snow storm, I was out shoveling my front walk. By myself. A truck drove by and with some equipment in the back and slowed down. Then it kept going. I thought, well, this is gonna be some guy asking to do my snow removal for pay. So I wasn’t really surprised when he circled the block, came back and pulled up in front of my house. But I’m not going to pay someone to do my little front walk, though this snow was really heavy. I just got ready to tell him, no, thanks, I got this. But you know? He was pretty cute. Nice eyes. Nice smile. Had a hat on, which can mask a lot, plus, he was sitting in a truck with a big jacket on so height and weight were not clearly apparent, but still . . . As it turned out he didn’t ask me to hire him to shovel my snow. He had pulled over . . . (on a busy street, mind you) . . . just to talk.

I’ve found that nothing screams SINGLE for a woman more than doing exterior work on your house (not gardening). Exterior painting? Clearly this woman has no man. And now . . . shoveling snow? This chick must be single. Still, I was not prepared to be hit on outside my house on a snowy day with a shovel in my hand. Actually I was not prepared to be outside in the snow — NO TISSUES. My nose was running like Kobe Bryant at a Gay Pride Parade (tee hee). But lone pioneer woman that I am, my sleeve and gloves were good enough for the task at hand. That is, until this good-looking guy was trying to talk to me. And I was a — sans makeup, nose running, ugly knit hat and hand-me-down snow pants wearing — hot mess. 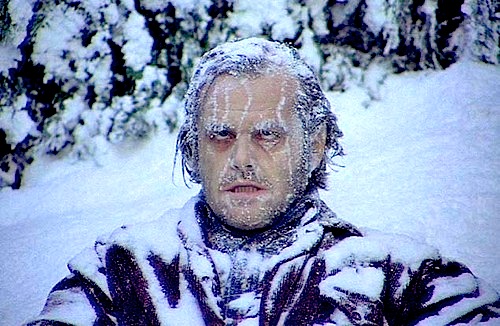 Okay, so maybe I didn’t look quite this bad.

He managed to find out from me that I am indeed single, own the home, not a drug user, not a church go-er and my true age (not something I generally share, not even with myself some days). The man has interrogation skills. Or, standing there in the cold, trying to control my snot as traffic was whizzing by, I just didn’t feel like being coy. I found out his age (men always tell you that and of course he’s younger than me), where he works and where he goes to church. I got a little sermon about having faith and that will see me through. Then he tried to get my number. This man kinda liked me. As he already knew where I lived, I didn’t feel like giving out any additional information (aren’t you supposed to get the guy’s number anyway?). So I got his number and name (it was a sexy, French name). He made me promise that I would think about calling. “We could have coffee or something,” he suggested. And he invited me to church.

I did think about calling him. I still do. I figure, I can only get better in his eyes — I wonder how much more smitten he’d be if he saw me without snot, breathing through my nose instead of mouth, and maybe with a little lipstick on and dressed up in maybe — say — shoes — instead of snowboots. But I didn’t call, still freaked out about being single. (Translation: chicken-sh*t) But I have the number, right here in my phone.

Leave a Reply to I Turned Down A Dinner Date With An Ex-Con « Just Me With . . . Cancel reply