My diapering days are long gone.   But they were substantial.   Four in diapers in the day, five at night.    But there are some things I will never forget and my tween and teen children and others seem to enjoy Baby B’s potty training fiasco.  So here it goes.

At the time I had four in diapers.   The older twins were nearing potty training age and showed signs of readiness.   I, however, was not ready to potty train  toddler twins with infant twins in tow and an active 3-year-old.   My mom, though, bless her heart, kept nudging me, “They’re ready.  They’re ready.  When are you going to train them? ”   She was insistent.   I caved.

My way of potty training is not my mother’s.   I never did sit a baby on potty at certain times and wait  until something comes out.   No offense to my mom, and kudos to her –but she never had more than one kid in diapers.   She and Daddy were smart or lucky enough to space their children accordingly.    No, my method is to wait until the kid is really ready, then take the diaper off.   Now you can’t go out much during those first few days.   And there will be mess and laundry, but the kid will get to the potty eventually and get something in it.    Just one of the twins was showing the readiness signs so I thought I’d train one at a time  (I figured it would quiet Mom down some even just doing one kid).

Bye Bye Wee Wee!  Someone had lent us  this little cartoon video on potty training “Once Upon a Potty” where the little one walks around naked learning how to use the potty.   Sometimes the wee wee and poo poo were on the floor, but when the kid got it in the potty it was like a Mardi Gras celebration.   The child is depicted as so, so proud and makes a big deal out of waving goodbye to the wee wee and poo poo as it is flushed away.    It was cute.    And it went along with my potty training method.

The singleton was at pre-school.   We only had the girls.  Maybe that’s why we left the house.  Why, why? Often if  I had to  go somewhere and I’d get my mom and she’d sit in the car with the kids while I ran in the store, etc.  But why did we go out that day, during the  grandmom pressured potty training?

Whatever the reason,  we were out. And, of course, the older twins got hungry.   I was unprepared, ill-equipped for this inevitability.  Did I say we didn’t go out much?   Plus all my babies were breast-fed  and I never got used to packing up bottles or snacks if we did go out.  (Got Boobs?  Okay, we can go.)  So we stopped for fast food (again, not something I was accustomed to, so for the kids it was a rare treat).

Of course — the grabbing of the crouch and the simple word from Baby B,

Damn.    Now, of course, I know  this is all a scam.  Children at this age just like to see bathrooms  in other places  and will always ask to go to the potty when they are anywhere else but home.   Still,  any person around a potty training child knows that you’ve got T minus 3  . . . 2  . . . 1  . . . to get to a toilet — that is if they really have to go, which you don’t know until you try.  So,  I had to take her.  She didn’t have a diaper on, remember?  So  I had to take her to a public bathroom, a public bathroom at McDonald’s.   And it wasn’t particularly clean (surprise).    And this is a GIRL!   I tried to check the seat for errant piss.   I did the toilet paper on the seat thing in record time and then . . . .  (tinkle, tinkle, tinkle)  — would have been music to my mother’s ears but she was sitting out in the comfort of the restaurant area — not in the small sticky stinky dirty McDonald’s bathroom.     I was just — well, pissed.  (Pun intended.)  I did the “Good Job!!”  cheer and implored her not to touch anything.   But I was pissed.  Pissed that the primary motivation for my doing this was  the softly consistent and disturbingly effective pressure from my mom —  and all the moms that came before me (or so it seemed).

My baby girl (well, one of them) was proud and playing and dancing around the bathroom.   She was still so toddler-ish.   I washed her hands and  while I was trying to keep her from sitting on the McDonald’s bathroom floor in front of the toilet, I washed mine.  In my head I was making plans  for bath time when we got home (for both of us).

Then,  my little girl turned,

put her hands ON the toilet seat,

stuck her head INTO the toilet

Clearly in my mind, if the baby-child is not old enough not to put her head in a public toilet, then perhaps she is not ready for potty training.   When we got home and washed up, I put a diaper back on my girl.   I was flustered and annoyed at myself for not trusting my own instincts.

There have been times in life where I will freely admit that I should have listened to my Mom.  This was not one of them.

At that moment, as far I was concerned, Baby B would wear a diaper until she took it off herself, drove  to Victoria’s Secret and bought herself her own panties from money she made from her job as a Superior Court Judge. 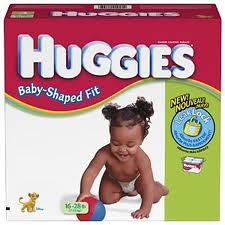 In the end, it was only a  few months until both girls were ready for potty training and they were trained  quickly, without incident (but with. of course,  the requisite accidents along the way).  We were eventually able to leave the house.

Lesson learned?   The time has to be right — for everybody.