It Wasn’t The Shoes — Looking Sexy Without Heels 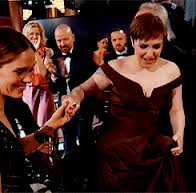 I admit, I’ve been a bit obsessed with footwear lately, and not in a good way.

I’ve researched Chinese foot binding, have had a running commentary in my head about women’s fashion and how across cultures and continents women’s fashion has served to decrease our mobility. I’ve been thinking that even despite recent “equality” and participation in sports we expect each other to be “bad-ass” with the constraints of clothing that limit or alter our movement. In the old days we weren’t supposed to do anything but now we’re supposed to do everything — in heels.

Raising children has got me thinking as well. I’ve seen them all take their first toddler steps, learn to run, to play, and to compete in sports, but I realize that soon, though my boy will continue in this path, my girls will likely do the same tasks as my son — while standing on their toes. When they are older and allowed to, they may choose to re-learn how to walk in heels that are getting ridiculously high. I acknowledge that men’s ties and jackets, especially in Summer, are uncomfortable, but they usually don’t cause actual pain like some women’s fashions can. And even if men are hot and bothered, they can still walk and stand — even in grass or sand. (Rhyme unintended.) 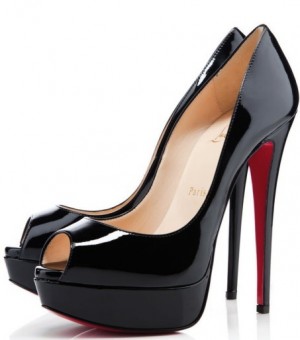 As reported by Fashionista.com, here are the shoes Lena wore under her dress.

When writer, director, producer and actress Lena Dunham won her Golden Globe, she literally hobbled up to the stage, needing help like an elderly lady. This woman is taking Hollywood by storm, but on her big night, she was unsteady. Hugh Jackman, on the other hand, had the flu — but he could walk.

The thing is, Lena’s shoes didn’t even show, yet she chose to wear what, six-inch designer heels? See Fashionista.com. The fascination we have (and I’m not completely immune) with shoes is beyond the scope of this post, especially since, as I’ve said, I’m obsessed . . . but let me offer a true shoe story.

The night before the Golden Globes I attended a fundraising event. It was a dressy affair. As a volunteer organizer, I knew I’d be on my feet the whole evening. I also knew that parking was a problem and I’d likely have to walk blocks across a college campus to get to the affair’s location. So, I made a bold decision.

I did not wear dress shoes.

Instead, my shoes were clog like, the kind normally worn with jeans. Still honoring “cocktail attire” I wore dress black pants and a sequined top. Since, however, the pants were dressy they were longer than they needed to be (I’m assuming to compensate for the heels that women usually wear). My feet and my comfortable shoes were practically covered. And if my shoes did peek out, since they, too, were black they did not make a statement. No bows, no ribbons, no sequins, no sparkles, no spikes, no red bottoms, no color — no — nothing — on the shoes.

I deliberately chose not to call attention to my feet.

Are you thinking I went the old lady route? Are you gasping in horror? Are you laughing at my fashion faux-pas?

Well, I was no old lady. Au contraire, I was — sexy. I brought the attention north, you see. My top was the statement. It had spaghetti straps and silver sequined triangles draped over the breasts which accentuated “the girls” and my shoulders quite nicely. The blouse had a slightly see-through bodice with a sequined edge going all the way around the bottom hem. I’d just had my hair highlighted and wore it out with in waves of loose curls. I wore full makeup, including great lipstick/gloss and left my eye-glasses at home. Shiny earrings hung from the lobes but I left the neck naked — again to accentuate “the girls.”

A funny thing happened. I was complimented more than I had been in — in — I can’t even remember. Men and women told me I was “beautiful,” “elegant,” “lovely” . . . repeatedly. (Quite nice for my ego.) Drinks were flowing at this event and I received a few slightly inappropriate compliments and appraisals from married men. Since this was a fundraiser for high-schoolers they were there to perform and serve the adults. It bears mentioning that I even got a direct compliment from a 16-year-old girl along with looks of approval from her brethren — me, somebody’s mother! I told my son how his teacher, an attractive, recently divorced man who barely acknowledges me normally, stopped me to tell me (repeatedly) how beautiful I looked. After a moment of silence my son’s response was, “I’m sick of you.” Ha! — high praise for a mom in teen boy world.

All this, and it had nothing to do with the shoes.

Except that, because my feet did not hurt, I felt good. I danced and I didn’t have to take my shoes off to do so. And even though I was on my feet for six hours, I wasn’t fatigued or sore. You see, when you feel good, it’s easier to look good — sexy. I didn’t need the Barbie feet. I didn’t need the clack, clack, clack of the stilettos. (And yes, I own some.) But without them I could confidently cross the room without worrying about slipping, falling or hurting. I could even do stairs, all while being “elegant.” It was liberating, yet I still felt very, very feminine.

By all reports and stolen glances I must have looked damned good . . .

For a fictional shoe story, see my Dressed for Success at The Indie Chicks.

Update: The Indie Chicks has closed its doors.

For an earlier decision to call attention to the girls, see The Summer of Cleavage.

If Lena Dunham had worn sneakers under that long dress (and had it hemmed accordingly), we wouldn’t have been the wiser and she could have taken the stage under her own considerable, impressive power.

Oh well, enough about her shoes. It ain’t about the shoes all the time. Congratulations Lena Dunham, Best Actress in a Comedy Series! Much respect.