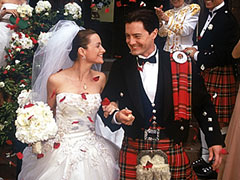 Charlotte and Trey, Sex and The City

Weddings are everywhere now.  Movies, royals, my ex-husband, . . . everywhere.   So I thought I’d write about my own bride story, hopefully not in a “I should have known” way, but just the facts, ma’am.

I was having an evening church wedding.  My bridesmaids were my sister, my best friend, and two  close friends.   The rehearsal dinner was meant to be casual, pizza and soda/wine at my parents’ house.  The rehearsal itself had gone pretty well, I’d done the “get someone to stand in for the bride” thing  . . . so I watched.

Probably not the best idea.

On the five minute ride from the church to my parents’ house, I was driven by my college best friend, discussed in the I Don’t Go To Weddings  and Always a Bridesmaid posts.

I got in the car and said to her, simply.

My Bridesmaid  was very calm, and, after she’d gotten me to clarify and  repeat my confession that I was not going to get married, she replied,

“Oh, I’m not nervous.  I’m just not doing it.” As if I was talking about getting on a ride at an amusement park.

What could she say?  I think she just said okay. She must have felt horrible.   I was so matter-of-fact about this huge statement.  I went through  our rehearsal dinner, and it was, as I’d wanted it, informal.   My husband-to-be  looked so  veryhappy, I remember.  Still,  I didn’t say or do anything that revealed my discomfort.  I did love him. Something was pissing me off, though.  For a fleeting second  I felt like he’d won, he “gotten” me, clipped my wings.

The next day, I  did the whole wedding day prep thing, got my makeup and hair done, put on the big white dress.   I guess I thought I was over it.  But I wasn’t excited.

Once we were at the church, we realized that someone forgot to bring  the flowers for the flower girls.  Silly to have little girls with nothing in their hands.  Someone had to run back to the house to get the flowers.

This gave me time.  Maybe too much time.

Later, my bridesmaids told me that at first they thought I was praying.   But I wasn’t a praying kind of girl, not in a room full of people, anyway.  Maybe praying is what I should have been doing.  What I was doing was seriously considering making a run for it, big white dress and all.   I pictured myself running out of the church, across the busy street,  and through town, like in a movie. 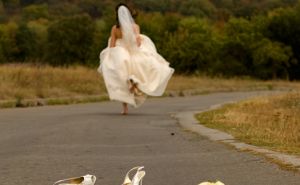 Awkward.  I heard the bustling around me, wondering if anyone noticed that I had put myself in time-out and that I wasn’t speaking to anyone.   Ironically, the big white dress — with a train–  created a physical barrier from everyone.  I was hard to get to. My body was in the corner, my face was down, the dress fanned out around me.  Still, I think I was waiting for somebody to do . . .  something.

It started to get uncomfortably quiet.

Finally, my best friend slid herself between the wall and my dress to get close enough to me to say,

“Are you all right?’

Someone came back with the flowers for the flower girls.

At the last minute me and my big white dress turned around and got married.   And, by the way,  he was so nervous, he did not even  look at me while we took our vows.  I joked later that he really married the minister, not me.

Does anyone remember Charlotte’s first wedding on Sex and the City?   Charlotte  expressed second thoughts to Carrie at the back of the church (because Trey couldn’t perform).  Though Carrie at first responded that it was just nerves,  she eventually told Charlotte that she doesn’t have to get married,

I have wondered over the years — what if someone had said to me, “You don’t have to do this.”   I’m not sure if it would have changed anything.   Like Charlotte, even the most ambivalent of brides would probably go through with it anyway.

This is in no way a criticism to my bridesmaids for not uttering the Carrie words.  We we all so young.  None of us knew what we were doing.   I was the first of our age group to get married.  It takes a very mature person to  actively assist a runaway bride.  So I know why they didn’t say it.

But what if someone had?

The institution of marriage should not, as the preacher says, be entered into lightly.  So for all you bridesmaids out there, who have promised to wear the  coordinating dresses and walk ahead of  the bride down the aisle — don’t forget to look back to make sure she’s there.  Well, actually before that,  let her know that, if need be,  you will run out to the street and hail a cab for her . . . big white dress and all.

Funny, when my now ex-husband got re-married, I was just The Nanny.   But I did have dinner with one of my former bridesmaids that day.  Perhaps she didn’t know what to say when I got married, but she knew what to say when my divorce was final.  My relationship with her has stood the test of time, hopefully, until death do us part. See To My Best Friend On Mother’s Day

Leave a Reply to Just Me With . . . Cancel reply