And the Guys Say: Just Say Yes! — To Dating 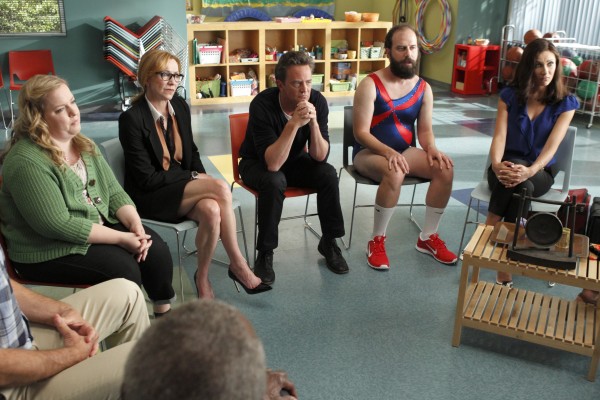 I’ve gone to group therapy before to deal with my depression.  You know, in  a room of complete strangers baring my soul and my business.  I’m not sure why it works, but it can be effective.   I’ve never had any problem with drugs or alcohol but after having been to group I now understand why recovering addicts continue to go to meetings well after they are off the bottle,  pipe or pill.  Non-addiction related group therapy works kind of the same,  Hello I’m [fill in the blank] and I’m here for [ depression, OCD, anxiety, etc].

In group, sometimes strangers can be so supportive in a way that friends and family cannot.  These similarly flawed people served as a mirror to my own self and offered help to find a solution to my blues.   The last time I went to group, there was a theme for how to deal with my major episodic clinical depression, a chronic condition triggered by the end of my marriage.

It was a common theme.   The guys said I need to go out — with men.  In other words, I need to date.    Quite antithetical to my historically feminist sensibilities.

“I don’t need a man to help me get over my problems,”   replied the feminist voice inside me.

The process of separating myself from my ex-husband  had been difficult enough and I certainly wasn’t looking for a replacement.

But the group therapy guys, insisted:  “You need to go out.”

Dude, is it that obvious?

It’s not like I haven’t had male companionship since my marriage fell apart, but  aside from the  Transitional Man, the other men were guys I’d already known from throughout the years.   You know, kind of comfortable guys.  What I hadn’t done is open myself up for  new men, random men, being approached by men  and actually being approachable —  just dating.

During the time I was going to group, I was perfectly content  with not seeing anyone.   Not because I was afraid of being hurt again.  I believed, and still do, that no one could hurt me as much as my Ex had, just given the sheer number of years I’d put in with him.  (Kind of like having cramps after having experienced labor, what once would have crippled me  in pain turns into a mere annoyance).  And, no, I don’t hate men, either.   I just didn’t really see the need, other than enjoying the occasional physical release they can provide.   My fear, if I cop to one, is really that I might actually find a man.  I was and am sure that another marriage is not the goal, nor do I have room in my little house  —  let alone  my life —  for another person.   Plus, with so many kids, well,  there are the practical considerations of  finding the time, etc . . .  I could go on and on BUT . . .

Apparently none of that mattered — to the guys.

The guys suggested, strongly suggested,  that I go out  on dates and “Let somebody treat you  right,”  they said.  They weren’t saying I should go on the hunt for husband number two or even a boyfriend, or  that I needed to get laid,  just that I  casually date.  “You need to let somebody spoil you,” they said.    “Guys would eat you up.” (double entendre accidental — I think) .      Really?

They were so sweet that way.   Some of these guys were in for anger issues,  had been victims of and/or committed abuse —  these were tough dudes.  The fact that these guys were suggesting flowers and dinner was  a real eye opener.  In fact, they were telling me to open up.

It was food for thought.  “No, I don’t need to find a man,” I told my feminist self,  but  could I benefit from seeing my value reflected in a man’s eyes over a meal or coffee?   Perhaps.    And,  wouldn’t it be nice knowing I  have the option of walking away if I’m not having fun?   Absolutely.    No lawyers, no visitations, not even any mutual friends —  just  “Buh Bye”?

So should I say yes?  Should I let a man “woo” me even though I have no desire to be “won.”

Seems so simple.  But it’s the one thing I haven’t truly embraced in my not-so-new state of singlehood.

Notably, the women in group were supportive,  too.   They talked about being thankful for the kids, and that what I’m doing for them now will pay off later.

But the guys?  They weren’t talking about mothering.

Just Me With . . . thoughts of just saying yes.